Sitting out a severe storm in your Airstream is a very different experience compared to sitting one out in your home. In a house, the average thunderstorm can be a bit exciting, and usually your biggest concern is whether you'll lose power.

In an RV of any type, when the sky turns black and begins pelting you with hail and lightning bolts, you suddenly have a sense of just how small and fragile your shelter is. One begins to wonder about the life choices that led to you spending the night under such circumstances ...

But really, there's not much reason to worry. I've weathered many a severe storm in my Airstream. Here are my top take-aways:

It always sounds worse than it is

The first few times you hear heavy rain pounding on the aluminum roof of an Airstream trailer (or the composite roof of a motorhome), it's pretty disconcerting. But there's no reason to worry. Your Airstream is a pretty sturdy thing and it won't be harmed by pounding or heavy rain. Relax and admire the strength of the riveted construction that an aluminum Airstream trailer shares with battleships and bridges.

High wind is rarely the problem

An Airstream is built to barrel down the road at high speeds all day, every day, so it's pretty chill about a 60 or 70 MPH wind gust. The aerodynamic shape helps a lot.

I once abandoned my Airstream in a parking lot when a hurricane came through. The winds were strong enough to knock a large motorhome parked next to me flat on its side. (The occupants, who had chosen to stay in the motorhome, had to be rescued through the windshield.) But the Airstream was still there, serene and undamaged.

You'll be safe from lightning if you stay inside 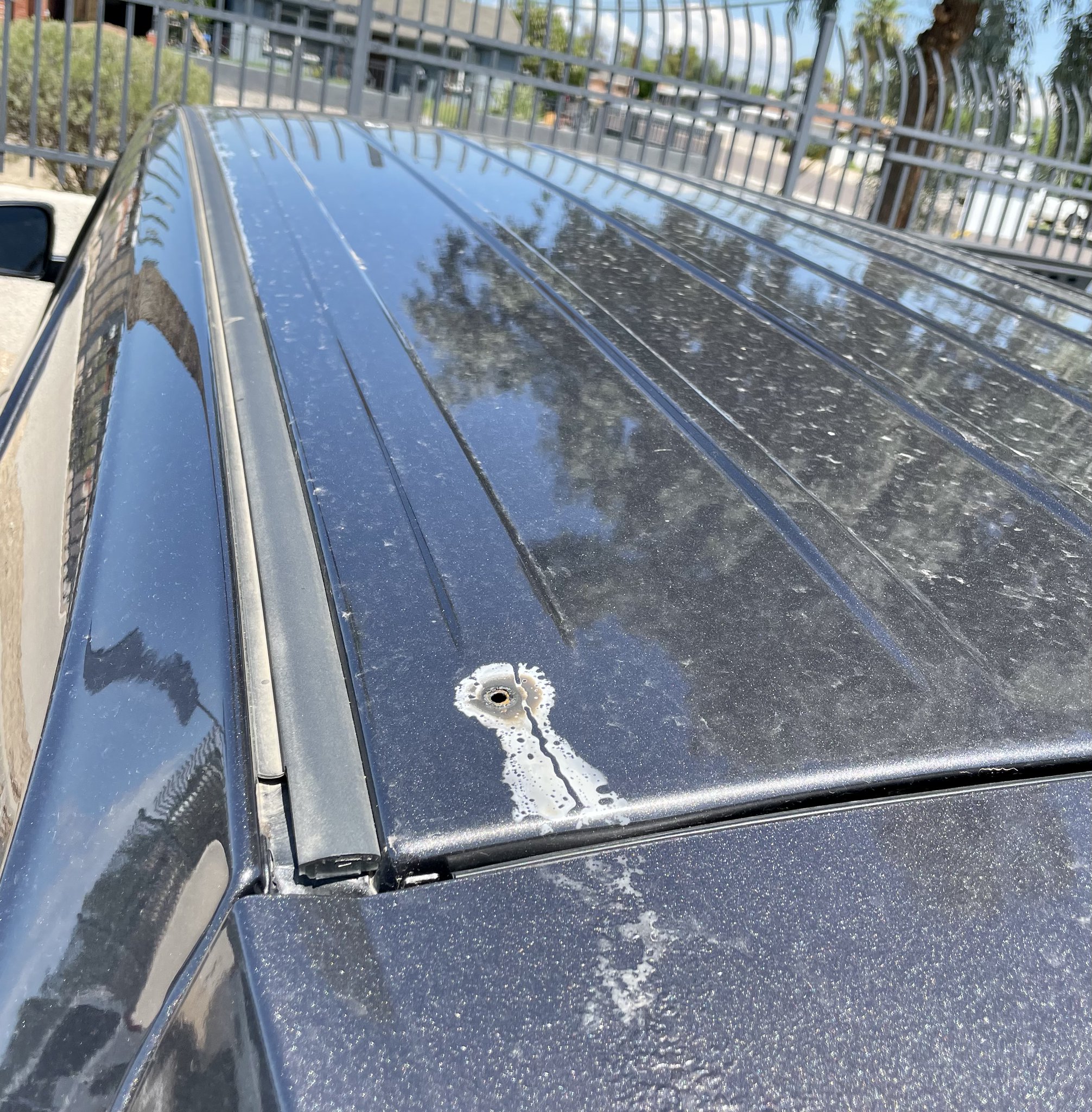 But that doesn't mean you get off scot-free. A lightning strike is serious business. It's very rare, but if it happens very likely there will be damage to electrical items. There may be burn marks, or even a hole in the skin of the Airstream that will need to be patched.

In a house you expect to lose power in a severe storm, but of course the Airstream has independent battery power, so you'll still have lights, heat, water pressure, refrigerator, etc., even when the campground power goes off.

Storms can cause havoc in the power supply, with brownouts and voltage surges that can damage your air conditioner and other expensive appliances. To help protect your Airstream's systems, either get an Electrical Management System or unplug the Airstream before a serious storm arrives.

Take shelter from hurricanes and tornados

So far, we've covered the high winds, rain, and lightning that comes from thunderstorms. Those are pretty benign events compared to hurricanes and tornados.

But don't mess around if the forecast warns of hurricane or tornado potential. Get out of the Airstream and into a sturdy building.

If you're in a campground where such events are common, ask the camp host or staff where the designated shelter can be found. Keep an eye on the weather with an app, a weather radio, or TV, and have what you need on hand so you're ready to bail out quickly.

There's not much you can do when hail arrives. You can't drive away from it without risking more damage, and you usually can't find shelter on short notice that's large enough to protect the Airstream. But there are a few strategies that might help you avoid it in the first place. For more on that, see our blog on hail. If the Airstream might be in danger of being trapped by flooding, or having a large tree limb fall on it, consider switching sites or bailing out entirely. A heavy tree limb can crush an aluminum Airstream like a soda can—and it would definitely disturb your sleep.

Campgrounds will generally be understanding about this, but even if they aren't, who cares about losing the cost of a night or two compared to what could happen?

Flooding is also important to consider, especially in low-lying or coastal areas. Keep in mind that while flooding at your site might be minimal, your escape route to the mainland might be cut off.

Is their an electrical grounding advantage to deploying the stabilizers directly on the ground rather than setting them on a pad of some sort during a storm or an electrical short in the AS?

Excellent article. Being into my 10th year on the road, I’ve been through a few storms (no hail, thank heavens). In two storms where folks said, the next day, that they thought their rig was going to go over … I slept through it!

I appreciate the reminder and suggestions as I’ll be on the road again in about three weeks. I’ll see you this winter as I’m headed to volunteer at the Buenos Aires National Wildlife Refuge.

This (“but of course the Airstream has independent battery power, so you’ll still have lights, heat, water pressure, refrigerator, etc., even when the campground power goes off”} is not an accurate statement—at least not for my Flying Cloud. Of course, we can run the fridge from the propane, just not batteries.

Neal: There’s no difference during a lightning strike, whether the stabilizers are touching the ground or not. Think of it this way: If the lightning can travel a mile down through the sky, it can easily jump 1" through a plastic stabilizer pad.